After the email exchange that I posted on Friday, Nick and I decided that what we really wanted to accomplish on Saturday was a partial basement overhaul.  This gave us each a task that was distinct (no bickering over how to progress or who does what!) yet in the same vicinity (togetherness!).  So yesterday morning, we charged our eleven-year-old with making waffles, gave strict instructions on how to treat each other while we were out of earshot, granted permission for a little Wii U time, and then headed downstairs.

Nick tackled the boxes of tools (hand and power) that his father used to have in a basement workshop before moving out of their home of 40 years.  This is a tough assignment, because every box has a memory within of something his dad no longer does -- either because he isn't physically capable or because he cannot find it within himself to try again.

As a professional artist, my father-in-law worked in two dimensions.  He began his career at a greeting card company (where he met my mother-in-law) and finished it as a freelance illustrator working for Disney, Random House, Golden Books, and others.  In his personal time, he worked in wood.  He would see something he liked on paper and attempt to recreated in 3D.  Every year he carved at least one Santa Claus, a few of which were featured in woodcarving magazines. In the non-holiday seasons, he dabbled everything from folk figures to bookends to fancy boxes.  Sometimes he would add a mechanical feature, like a magician's arm with a magnet that would reveal a different card when you moved it up than when you moved it down. 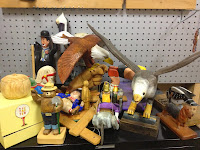 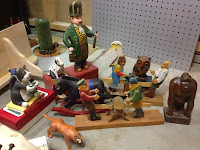 Eight years ago, when we moved his dad from New Jersey to live with us, we set up a workshop in our walk-in attic, but he never once used it.  Nick is still dealing with residual guilt.  (I've tried to tell him it's not his fault, but he was raised Catholic.  I'm Baptist.  We're stingy about things like guilt.)  Since then, his dad has moved to a retirement community, and all the wood shop stuff has moved into our basement.  So Nick sorted countless chisels and saws and sanders and clamps and brushes and drill bits, as well as three boxes worth of interesting scraps of wood for our 9-year-old who loves to build her own toyscapes.  (She created a skate park, complete with half-pipes, as a gift for our elf on the shelf, Annie.)  And he stoically pieced together the carvings that had been battered and bruised over the course of three moves, each one a memory from the days when his dad was a younger version of the man he is today.

On the other side of the basement, I had my own project: dozens of buckets of clothes and shoes -- outgrown and to-be-grown-into -- that had been thrown into a back corner when the previous wearer changed sizes.  Each needed to be gone through, sized, and sorted into piles for Goodwill, younger sister, or younger niece.  This is a permanent item on my to-do list.

Like the tools and carvings for Nick, so many of these items bring back very specific memories for me: outfits worn for school pictures (cute tops from when I remembered the day, t-shirts from when I didn't); an abundance of orange from B's second grade year because it was her teacher's favorite color; camp-logoed sweatpants she bought on day two because I didn't pack warm enough clothing for chilly mountain evenings; the last few sets of matching holiday dresses before they refused to wear them anymore.

I began to be overwhelmed with the transitions I could see, especially in the Size 10-12 stack that represents my older daughter's 3rd-4th grade years.  Although I cannot tell you the specific age or time of year that each of these transitions occurred (not only am I bad about keeping my basement organized, I'm also lousy at baby-book-esque recording), they were all there -- captured in the clothes I folded and stacked.

My younger daughter is now in 3rd grade, and although she still wears a size 7, I anticipate that this will be the year her clothes begin to tell the story about the young woman she will become.  Will paint and glue splatters from her countless art projects remain de rigueur?  Will the ballet leotards and tights be traded in for another, greater love?  Will she continue to love lime green, her older sister's favorite color, or will she branch out on her own and declare another hue to represent her truest self?

When the House Wren on my singing bird clock, a gift from my maternal grandmother, chirped 4:00, we came up for air and to locate our children.  B, in her running shorts, was curled up and reading about Annabeth's adventures in the latest Rick Riordan novel.  A, in a pink shirt, was digging through the boxes of wood scraps and imagining what she could create.  A kennel for American Girl pets seemed to be the frontrunner idea.  For the time being, the younger versions of themselves seem like they'll stay for a while.
Posted by ncmorgan at 9:10 AM